The big day comes, she becomes Mrs, then life moves in a world wind of experiences and your wedding day becomes a fragment of a memory, which you relive upon opening your album…. We are excited to celebrate the 10 year anniversary of Diane & John by taking a look back to the beginning…

Week after week I am tickled to learn how our lovely couples come to be and fall in love. It appears that higher learning facilities are the paramount stage set to meet your future companion. That is, in fact where Diane & John’s tale begins…..In front of the Science Lab at St. John’s University to be exact! Having known each other they reacquainted and hit it off rather quickly.

To commemorate their graduation, the couple planned a five-week trip to Italy touring through Rome, Florence, Positano & Sicily. Diane says, “While falling in love with the country, WE fell in love!”

One year later John asked her to be his. After much contemplation they both agreed a destination wedding was the only way and Positano was the only location.

Diana & John were married in Santa Maria Assunta church which dates from the 13th century. The reception took place at Covo Dei Saraceni, a restaurant/hotel with balconies overlooking the Mediterranean Sea. Diana recalls, “It was breathtaking. We celebrated our wedding with 35 of our closest family and friends. Anthony shot our pictures even in the sea. It was unforgettable.”

Thank you Diane & John for sharing your memories of an exceptional day! 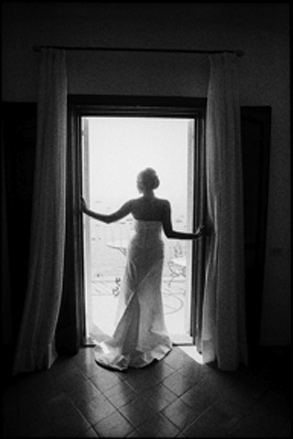